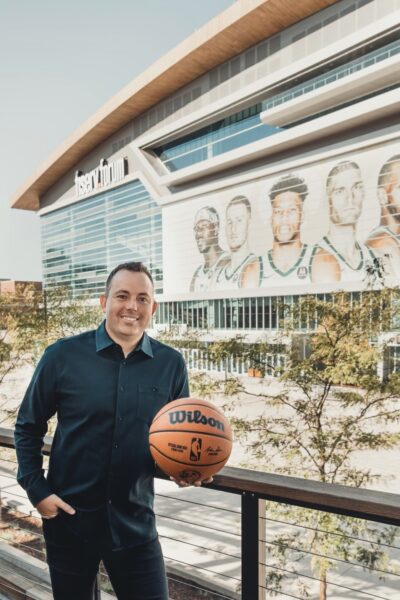 Jon Horst enters his fifth season as General Manager of the Milwaukee Bucks after being named to the position in June of 2017. In his tenure as GM, Horst has restructured the team’s basketball operations by reimagining roles, responsibilities and processes of the team’s front office staff, and has executed key roster decisions that have turned the Bucks into a consistent contender and the 2021 NBA Champions.

In Horst’s four seasons in his post, the Bucks are 206-103 (.667), have made the playoffs all four seasons, including two trips to the Eastern Conference Finals and one NBA title, in addition to owning the best overall record and most playoff wins in the NBA over the last three seasons. In 2018, Horst oversaw the hiring process of current Bucks head coach Mike Budenholzer, who has since led the Bucks to those league-best marks and was named the 2018-19 NBA Coach of the Year. Horst has also upgraded the team’s roster through in-season and offseason trades, free agent signings, draft selections and by signing crucial pieces of the team to multi-year extensions.

Following the 2018-19 season, after the Bucks went 60-22 and advanced to the Eastern Conference Finals for the first time since 2001, Horst won NBA Executive of the Year in only his second year in the position, becoming just the second general manager in franchise history to win the award.

Horst’s early career success has been recognized on an international and local level as he was selected to the Leaders Under 40 Class of 2020, which identifies and recognizes exceptional individuals who are moving the industry forward, in addition to being named to the Milwaukee Business Journal’s 40 Under 40 Class of 2019.

Prior to becoming general manager in 2017, Horst served as the Bucks Director of Basketball Operations since 2008 in which he was instrumental in player evaluation, salary cap management and contract negotiations. Horst began his NBA front office career with the Detroit Pistons before coming to Milwaukee in 2008.

Horst graduated from Rochester (Mich.) College in 2006 with a degree in sports management. He and his wife, Mia, have two children, Sophie and Zeke.

Dinner Purpose & History
Partnership Dinner is an annual event that generates funding for student scholarships at Rochester University. The dinner is held annually during the spring. A special VIP reception for sponsors and the featured speaker is held in conjunction with the dinner. Unlike past years, the 51st dinner will host both an in-person dinner and a virtual option for those not able to join in person. This year we are excited to welcome back a RU alum, Jon Horst, as the featured speaker and guest emcee Chuck Gaidica, local news personality.

The evening also includes the recognition of the Alumni(us) of the Year and the new RU Excellence Award, student performances, RU community member feature stories, and much more!

*All sponsorships can be designated as virtual sponsorship instead of for the in-person dinner, please contact the development office at development@rochesteru.edu for details.