While most people log onto their computers to surf the internet, play games or read the news, Hudney Piquant, cyber solutions architect and Rochester University graduate, logs onto his computer to test out ChatGPT, an artificial intelligence tool that generates answers to questions, prompts, chapters of books and more.

“As someone who works in cybersecurity, I like to go on ChatGPT and test all of the different things it can do because it is going to be changing the future of technology,” Piquant said, who works as a solutions architect for Synack, a cybersecurity firm.

Piquant was awarded the “Most Inspiring and Up and Coming” award by Cyber Scoop, a popular news outlet in the cybersecurity field, in October 2022. This award is given to cybersecurity leaders in private and public sectors.

And while Piquant’s cybersecurity career has taken him across the globe to speak at large tech conferences, such as Security BSides in India, he got his start in information technology at RU.

Encouraged by former professor Dale Pauls, whom Piquant knew from his hometown church in Stamford, Connecticut, Piquant came to Rochester University in 2003. During that summer, Piquant became a student worker in the IT department and decided to pursue a career in computer science.
“I had originally come to RU in hopes of pursuing philosophy. I had talked with Dr. John Barton who encouraged me to try computer science since I could make more of a living that way. I walked out of that conversation with him and changed my major,” Piquant said.

As a student worker, Piquant helped faculty, staff and students with their computers, helped wire the Ham Library and other various IT tasks, which gave him the experience he needed to launch his career in cybersecurity.

After graduating from RU, Piquant worked a number of roles in IT and cybersecurity, including working as an information security analyst for the Federal Reserve and as an web applications engineer for GM Financial.

While in college, Piquant competed on the men’s soccer team. “Early on in my soccer career, we were playing against our rivalry at the time, Macomb. We ended up beating them, but we were tied in overtime and I scored the winning goal. I remember doing a back-flip because we were so excited.”
During Piquant’s time at RU, he met his wife, Erika (Watson, ‘04) while preparing for Celebration, a variety show that showcased the social clubs on campus. Erika was leading the choreography for the dance ensemble for the show and Hudney was featured in the ensemble as they performed the Michael Jackson song, “Thriller.” After Celebration, Hudney and Erika both competed in a dance off against each other. To this day, they still laugh and debate about who won.

Now married for 16 years, they have two daughters, Akira, 15, and Anye, 3. Erika started her own wedding planning business called Posh and Prim, which provides wedding planning services in Dallas and Metro Detroit. Akira, following in her mother’s entrepreneurial footsteps, has her own baking business called Bella De Bakery, where she makes custom cakes and other pastries. Erika homeschools both girls, which allows the family to travel. They are planning on spending the upcoming month of March in Europe.

Aside from traveling, spending time with family and logging onto ChatGPT, Piquant is writing a book that will merge the world of technology hacking and the gospel.

“One of my passions is giving the gospel and I am trying to explain to people how hacking has been around since the beginning of the Bible, in Genesis 3 or the fall of man. I want to use my cybersecurity background and knowledge and merge that with my passion of telling others about the gospel,” he said. 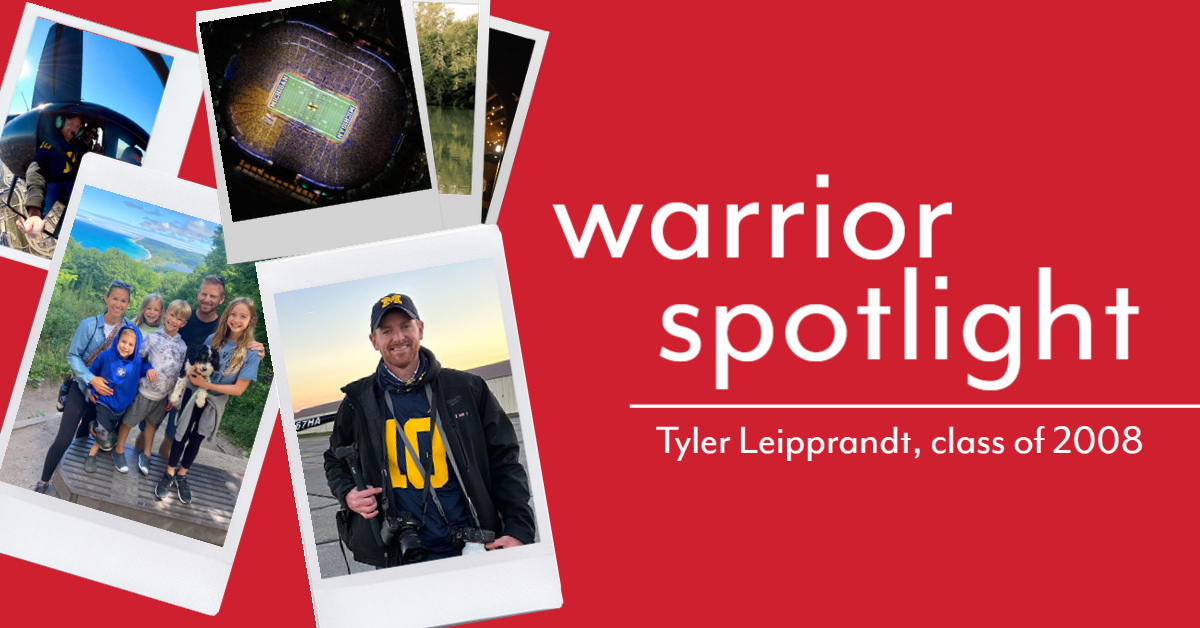 Capturing extreme photos and dangling out of Coast Guard helicopters are part of daily life for Tyler Leipprandt, a 2008 graduate of Rochester University.

Leipprandt is the founder of Michigan Sky Media, a full-service media company specializing in drone videography and photography. Leipprandt has taken photos of iconic Michigan landscapes and views from the top of the Mackinaw Bridge.

Leipprandt has a “bucket list” of dream photographs to capture. “I want to seek out bucket list photos to give people a new perspective,” Leipprandt said.

This October, Leipprandt grabbed one of his bucket list photos by capturing a jaw-dropping panorama shot of the Big House during the Michigan/Michigan State game from a helicopter 3,200 feet above the field. It shows a Coast Guard helicopter flying directly over the block M on field.

The picture itself is flawless, but getting the actual shot was a challenge. “I have dreamed of getting this shot, and seconds before I did, I thought I blew the opportunity,” he said. As Leipprandt was getting ready to take the shot, the helicopter landing skids covered the view of the field. Acting quickly, Leipprandt moved his camera angle between the helicopter and the landing skids, held the shutter down and captured the photo, which has attracted the views of thousands of fans. Over 1 million people have seen Leipprandt’s photo on Facebook and Instagram.

Leipprandt studied education at RU and worked in that field for a number of years, but he had an idea to purchase a drone to take real estate pictures. “Drones had just come out and I really wanted one. My wife told me that if you can figure out a way to make money with this, go ahead and get it.”

Before purchasing the drone, Leipprandt already was talking with real estate agents about taking photos from the sky of the houses and properties they were selling. Then, he envisioned taking drone pictures and videos of famous Michigan landscapes.

Leiprandt built up Michigan Sky Media while still working in education, and then he quit his teaching job to work full-time as a photographer in Traverse City, Michigan.

In addition to Michigan Sky Media, Leipprandt also works on Trekin Outdoors, a hunting TV show on the Sportsman Channel where he and his best friend travel the country showing the “real and raw realities of hunting and being outdoorsmen.” Leipprandt mostly films and edits, while also sometimes hunting.

Before he was capturing once in a lifetime shots and trekking across the country, Leipprandt grew up in Ubly, Michigan, located in the northern part of the thumb. Leipprandt’s father was a basketball coach who was active with the Basketball Coaches Association of Michigan, where he met Garth Pleasant, professor of sport management and former RU men’s basketball coach.

When Leipprandt was in high school, he played basketball and was recruited by RU to play at the collegiate level. Jon Horst, general manager of the Milwaukee Bucks who graduated in 2006, grew up in the thumb of Michigan and saw a few of Leipprandt’s basketball games and encouraged him to consider playing at RU.

On his recruiting tour at RU, Leipprandt and his father were shown the old gym on campus, which is now the Warrior Center. “My dad told me that day that if Garth Pleasant can do something special with a gym like this, then this is the right place for you to be.” In 2004, Leipprandt’s freshman year, the men’s basketball team won the USCAA national championship.

Leipprandt has fond memories of his time at Rochester University. “It was a great experience. I grew up in a Christian home and I liked that aspect of the community on campus.”

Leipprandt met his wife, Rachel, (Stuewer, 2010) after seeing her on campus with his brother, Joel, who also played basketball at RU and is now the Lead Pastor of Kensington Church’s Traverse City campus.

“I saw Rachel a few times on campus, and one day I was with my brother and told him ‘See that girl right there, I am going to marry her one day.” And now we’ve been together for 14 years and have three children and a mini-Aussie doodle.”

Leipprandt is donating a print of his Big House fly-by-photo to the RU Alumni Association to use in a silent auction at RU’s next Partnership Dinner on April 22, 2023. You can visit www.michiganskymedia.com to view and/or purchase any of Leipprandt’s photos. To hear the full story of the Big House fly-by-photo, click here.