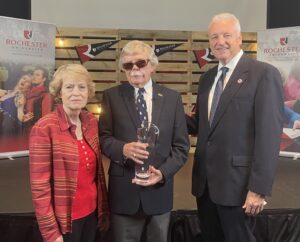 In 2007, Rochester University established an annual award to honor those who have modeled sacrificial service and philanthropic generosity for others in support of the university. This award was named after J. Robert and Mary Utley because of their steadfast commitment to scholarship and service.

In recognition of their philanthropic spirit and commitment to the Rochester University community, this year’s award is presented to John & Joyce Todd.

John and Joyce Todd moved back to their home state of Michigan in 1979. They had each graduated from Georgetown law school and had passed the Michigan Bar exam.

John worked while in law school and had written and passed a bill through Congress which provided benefits for widows and orphans of disabled veterans. He had planned to put up his shingle and practice law. However, that is not what God had intended him to do. Feeling the need to work, John accepted a teaching job at Michigan Christian College. Although he never thought of teaching, he fell in love with the students, the faculty staff and the mission. That was 42 years ago. And, as they say “the rest is history!”
In addition to his classroom duties, John has successfully defended the college twice in court. And did so without a fee. John has this to say about his life. “ I should have died on my last mission in Vietnam. Not only my life, but my brain, such as it is, was saved on that day 52 years ago. After a period of feeling sorry for myself, I not only accepted Jesus Christ, but also realized that God had a purpose for me. I worked for a President as the national Coordinator of a Vietnam veterans group. I lobbied Congress. I am proud of those activities, but in 1979 I found my life’s work here on 800 West Avon Road.”
Joyce Todd grew up in the neighboring town of Clawson, Michigan during the 1950’s. She has been connected to Rochester University from its very beginning, from buying $5 bricks for the building fund even before groundbreaking, to attending teen events on campus in the early 1960’s. Joyce eventually graduated from RU in 1967. She couldn’t see herself going anywhere else.

Growing up, Joyce’s family instilled in her the importance of honoring God by supporting ministries that furthered Kingdom work. From her work as an assistant prosecutor in Oakland County, specializing in prosecuting defendants who sexually abused children, Joyce viewed her career as one that sought justice for victims. In her retirement, she still believes strongly in this mission and volunteers as an attorney for victims of human trafficking. The other lesson Joyce learned from her parents was one of generosity, whether of her time or finances. No matter what financial resources she had been blessed with, she was taught that it was a privilege to give back. That has been her goal in supporting her alma mater. Whether with salary sharing, contributing to the new Garth Pleasant Arena, supporting scholarships, funding improvements or beautification of the campus grounds, Joyce found a great partner in her goal of financially supporting RU in her husband, John.

The Todd’s have been blessed with two lovely daughters and one grandson. Also with good jobs, good salaries and comfortable homes. John and Joyce have also dedicated themselves to Bible teaching, financially supporting their local church, missions and missionaries, and other Kingdom ventures spreading the Gospel throughout the world, but are especially proud of their opportunity to support RU.

Rochester University is honored to present the 2021 J. Robert & Mary Utley Philanthropist of the Year award to John & Joyce Todd.