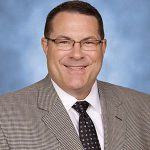 Scott Samuels serves as vice president for the college, overseeing the operation and strategy of enrollment, communication services and development. Scott grew up in Clawson, Michigan, and his family are long-time supporters of the college, dating back to the school’s early years.

Scott began his service at Rochester College in 2002 as he brought his strong business background to the classroom as a faculty member in the School of Business. Scott’s success in leading an employee campaign for Garth Pleasant Arena and his desire to work with prospective students led him out of the classroom and into advancement and later admissions.

Previously, Scott spent 14 years in banking, wealth management, and fiduciary trust services. In addition to his responsibilities in banking, Scott also spent time as a personal financial adviser for professional athletes. Most recently, Samuels served as the head of school at Oakland Christian School in Auburn Hills. He graduated from Oklahoma Christian in 1986 and went on to complete a master’s degree in finance from Walsh College in 1996. Scott is married to Christie (Powers) and they have one son, Jacob Scott Samuels.