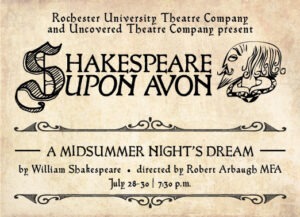 Every summer, the Rochester University Theatre Company produces Shakespeare Upon Avon.
Professional actors and directors from around the country come to RU’s campus to perform some  of Shakespeare’s best plays. Past shows include: Comedy of Errors, Macbeth, Two Gentlemen of Verona, Romeo and Juliet, Twelfth Night, Godspell and As You Like It. Come out and enjoy the Bard in our lovely outdoor theatre space!

Peter and the Starcatcher

Tony-winning Peter and the Starcatcher upends the century-old story of how a miserable orphan comes to be The Boy Who Would Not Grow Up (a.k.a. Peter Pan). A young orphan and his mates are shipped off from Victorian England to a distant island ruled by the evil King Zarboff. They know nothing of the mysterious trunk in the captain’s cabin, which contains a precious, otherworldly cargo. At sea, the boys are discovered by a precocious young girl named Molly, a Starcatcher-in-training who realizes that the trunk’s precious cargo is starstuff, a celestial substance so powerful that it must never fall into the wrong hands. When the ship is taken over by pirates – led by the fearsome Black Stache, a villain determined to claim the trunk and its treasure for his own – the journey quickly becomes a thrilling adventure.

PETER AND THE STARCATCHER
Is presented through special arrangement with Music Theatre International (MTI).
All authorized performance materials are also supplied by MTI.
www.mtishows.com

Join the Rochester University community and special musical guests as we celebrate the season with a sing-along of all your favorite Christmas carols, some special musical performances, and dramatic readings of some classic Christmas stories.

Songs and Shorts: A Night of One-Acts and Music

A 19-year-old man has just stood trial for the fatal stabbing of his father. “He doesn’t stand a chance,” mutters the guard as the 12 jurors are taken into the bleak jury room. It looks like an open-and-shut case—until one of the jurors begins opening the others’ eyes to the facts. Tempers get short, arguments grow heated, and the jurors become 12 angry men.

Produced by special arrangement with THE DRAMATIC PUBLISHING COMPANY of Woodstock, Illinois

24-Hour Theatre is an annual event where a group of RU students brainstorm, write, direct, design, and perform original oneact plays, all in one day. With just 24 hours to tackle all aspects of production and put together a live performance, it is always sure to be interesting! It’s fun! It’s crazy! It’s all put together in only one day!

During Theatrefest, RU Theatre welcomes local middle and high school students to spend a day learning from RU faculty and theatre professionals. Students spend the afternoon in fun-filled and illuminating workshops, choosing from topics like acting, auditioning, musical theatre, and technical theatre. In the evening, students will enjoy dinner and attend a performance of Love’s Labor’s Lost. Theatrefest is perfect for any student who loves theatre and just wants to learn more!