By Gabriella Burman via DesignTeam Plus 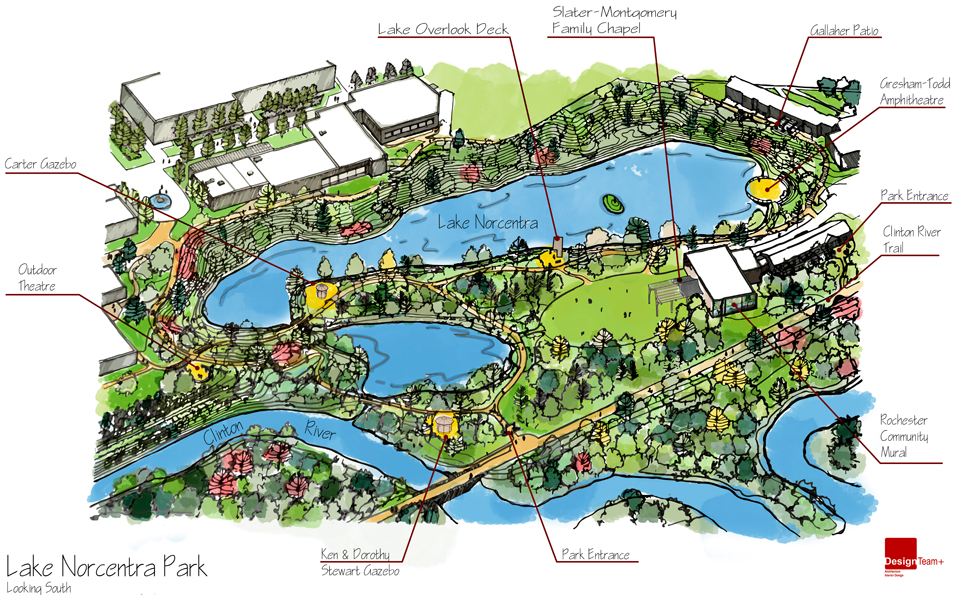 One of the hippest towns north of metropolitan Detroit is also one of the best places to enjoy autumn colors, as renovations near completion at Lake Norcentra Park, the jewel at the center of campus at Rochester University.

Founded in 1959 as North Central Christian College, and later known as Rochester College, the institution changed its name to Rochester University in 2019, amidst a major capital campaign that implemented many improvements resulting from a 2014 design charrette led by Birmingham, MI-based DesignTeam Plus, along with university stakeholders, the Lawrence Technological University Dean of Architecture, and 12 LTU architectural students. The intense, three-day period of planning and design was convened to re-envision the campus grounds, to turn the focus back to the lake at the center. Originally, the lake was a gravel pit operated by Boomer Construction in the early 1900s. Detroit advertising magnate Lou Maxon purchased and lavishly landscaped the property in the mid-1940s, and then sold it to the university in 1957.

By 2014, “the lake had grown stagnant,” architect Harold Remlinger, AIA, DTP co-founder and owner, recalled. “It’s connected to the Clinton River, which had changed course over the years, and fresh water was no longer flowing to the lake. It was time to rectify that,” he said. Reflecting on the Christian value of water as the giver of life, the design charrette participants determined to bring fresh water back to the lake. They came quickly to a consensus that a park surrounding the lake would make a tremendous impact visually, and environmentally, and become an inviting sanctuary not only for the student body, but also for the public. The participants proposed the two entrances off the popular Clinton River Trail, which borders the park.

“The design charrette was a huge success,” Larry Stewart, Director of Alumni Information and Institutional Research at Rochester University, recalled. “The area had long been favored by the campus community, but we knew it had a lot more potential. With Harold and interior designer and DTP co-founder Shari Stein’s leadership, concepts, and visualization, we crafted a master plan that led to buy-in for a common goal, greater success with procuring grants and philanthropic funding, and a design that has been realized, in phases, for the betterment of the community.”

The design charrette led to the installation of a lake overlook deck and gazebos, wayfinding signs, connecting trails between the lake and the Clinton River Trail, and the removal of a service building to make way for an outdoor chapel. Funding has also been secured for a small outdoor amphitheater. Now, DTP is back to update and create a map of locations around campus to reflect the improvements, and as part of the university’s rebranding effort.

Those involved derive much satisfaction from the intensive work that preceded the renovations. “Today,” Mr. Stewart said, “students tell me Lake Norcentra Park is their favorite part of campus, and I see a regular flow of people from the trail, taking pictures and relaxing in the peaceful setting. New and returning visitors are really enjoying the scenery, and it has improved the culture on campus.”