Located on a tranquil campus in one of America’s safest communities, Rochester University also shines on athletic fields. With 20 men’s and women’s athletic teams, the university competes in the National Association of Intercollegiate Athletics and the Wolverine–Hoosier Athletic Conference. Throughout the university’s history, several teams have won small-college national championships.

The university affirms its commitment to a holistic education that offers unique opportunities for faculty-student mentoring. The institution promotes an inclusive learning experience by welcoming students from all backgrounds, regions of the United States and foreign countries. Students, faculty and staff interact to create a healthy environment of mutual respect where every individual is heard, welcomed and respected.

In 1954, members of Churches of Christ formed a Board of Trustees to establish an educational institution in the North Central region of the United States. In the initial college catalog, the institution’s leaders affirmed their dedication “to the task of leading students toward higher academic achievement.” The founders also stated their belief “that the development of Christian ideals in the life of an individual is highly important.” Leaders of Rochester University remain firmly committed to those ideals.

The college opened in 1959 as North Central Christian College and became Michigan Christian Junior College in 1961. The board dropped “Junior” from the institution’s name in 1978 as the college prepared for the addition of its first bachelor’s degree program. The name was changed from Michigan Christian College to Rochester College in 1997. That change signaled a broadening of the college’s vision as a liberal arts Christian college. The institution became Rochester University in 2019.

The values-based and values-driven curriculum of the university provides a great educational experience in today’s culture. Men and women educated at Rochester University embrace challenge, apply problem-solving skills, serve their communities and provide leadership for challenges yet to come.

Rochester University maintains an archive of institutional publications, photographs and artifacts. In addition to the actual collection housed on campus, an online collection includes selected items for public use and viewing. The online site features over 800 publications and photos dating back to the 1950s. 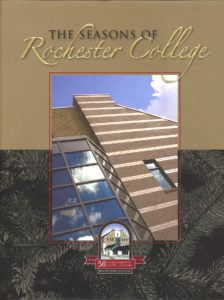 During it’s 50th anniversary, the university published “The Seasons of Rochester College” to trace the institution’s history from the founding of the board in 1957 though the 2008 celebration. The book is still available in printed form by contacting Larry Stewart at lstewart@rochesteru.edu. You may also view the book through the following links.

Rochester University is built upon a firm foundation laid by hundreds of individuals over the past six decades. Certain events stand out as historical milestones in the university’s progress.